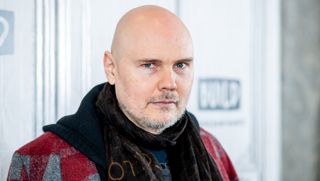 Billy Corgan was recently reunited with the Seventies-era Fender Stratocaster he used to record the Smashing Pumpkins’ 1991 debut album, Gish. The guitar, essential to the band’s early sound and decorated by Corgan with a custom psychedelic design, was stolen in June 1992 after a Pumpkins gig at St. Andrew’s Hall in Detroit.

But according to a report on RollingStone.com, a woman named Beth James living in Flushing, Michigan, had the beloved instrument in her basement for a decade or so, after purchasing it at a local yard sale for $200. After a friend notified her that the instrument might in fact belong to the Smashing Pumpkins frontman, she began attempting to contact the band via various channels. A meeting was eventually organized by music finance company Sound Royalties, a company that has worked with the likes of Lil Wayne and Rich Robinson, and the guitar was returned to Corgan.

Said Corgan to RollingStone.com, “God bless [James]. It falls under the ‘miracles can happen’ category. Even for a cynic like me.”

Corgan initially bought the Strat, which he believes to be a 1974 model, from Pumpkins drummer Jimmy Chamberlain around 1989 or 1990. “It instantly changed the way the band sounded and the way I played,” he said. “When it was stolen, it wasn’t like, ‘Oh, gee, my guitar just got stolen.’ It was the guitar that affected the way I played and I was heavily identified with the guitar.”

“I’m literally gonna take it somewhere, and get it fixed up,” he told RollingStone.com. “And I’ll start using it. It’s a really valuable guitar to me. And I mean, the timing is sort of strange, and auspicious, and so I take it as a sign that it’s supposed to be part of what we’re doing.”

Check out a pic of the recovered Strat below.