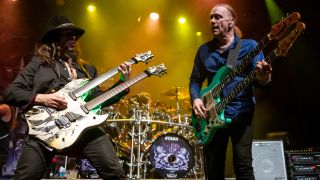 We’ve reported recently on major guitar stars who have gone fully digital onstage – hello, Mark Knopfler – and now Sons of Apollo's Bumblefoot has stepped up to reveal that when it comes to recording, he doesn’t bother with guitar amps at all.

In a recent interview with Premier Guitar, the man born Ron Thal was asked what his amplifier setup looks like for home recording purposes.

“This will piss off the purists,” responded the ‘Foot. “My guitar, plugged into my computer, and either an IK Multimedia AmpliTube or a Line 6 Helix Native.

Bumblefoot’s Sons of Apollo band mate, Billy Sheehan, also gave a shout-out to the Helix, and explained that when the band tracked their new album, MMXX, “It was all direct."

Sheehan said, “I used the Helix and an Ashly Audio compressor. The Helix has been glorious for doing tracks. If somebody calls me, I grab it, put it in the car, get there, and get everything we need – it’s really been wonderful.”

“Sometimes in a session, I’ll plug right into the console, add a little EQ, possibly a touch of compression, and play like that – depending on the session, of course. For Sons of Apollo, we needed a really grindy, pounding, frightening bass tone. I’m really pleased with the way it came out.”

Bumblefoot further elaborated on his gear approach by explaining, “I’ve been a Line 6 guy for 20 years, since the POD 2.0. When you find the right impulse responses to make it feel like you’re moving air, you can really get some nice stuff happening.

“And with the kind of touring I do, which is so diverse – one day I’ll be doing a guitar clinic, the next day I might be playing at a big festival with a band, the day after that might be an acoustic show, or some kind of one-man storytelling evening – it’s great having all your sounds there.”