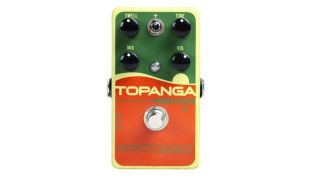 In addition to the “+” switch, the Topanga II features the same Dwell/Tone/Mix/Volume control set as the original, and is capable of conjuring up similar vintage-y Fender 6G15  vibes.

Start twisting knobs in conjunction with the signal in “+” mode, however, and you’re on your own, paddling out into uncharted ‘verb waters. Bon voyage!

The limited edition Topanga II is available for $219. For more information or to purchase, head to Catalinbread.