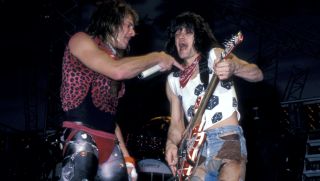 File this under You Learn Something New Every Day: In a recent interview with Missouri radio station KSHE 95 to promote his upcoming Las Vegas residency, David Lee Roth was asked about performing Van Halen songs as a solo act, and in particular whether he seeks permission from his electric guitar foil, Eddie Van Halen, and the rest of the band when adding the classic tunes into his sets.

Now, let’s stop here to acknowledge that, in addition to being one of the most mesmerizing frontmen in rock history, Diamond Dave is also an unparalleled interviewee, capable of holding court on the most mundane of topics in a manner that is endlessly entertaining.

Even so, his response here was stop-you-in-your-tracks wild.

“No,” he said about seeking permission. “Because I wrote the songs. I wrote every word you heard, every syllable. Every melody I structured out. Even the guitar solos on that first album.

“Why do you think the solos changed so radical? I sang the solos for Jamie’s Cryin’ and Runnin’ with the Devil, et cetera.”

As far as what fans can expect from his band at the upcoming Vegas shows? According to Dave, a lot.

"Van Halen live is lead-bass-drum. Here we start with three, four guitars, and we bring it with unforgiving attitude. We're not up here strumming with the devil, this is not some tribute band,” he said.

“I wrote those songs, structured those songs. I designed the backgrounds on the stage. I came up with the album covers. I thought of the stripes on the guitar. I’m the one who said, 'Call it Van Halen.' And we take it with that attitude. We ain't talkin’ ‘bout love.”

Dave also let it offered up another reveal: The name of his band for the Vegas gigs.

“We named the band, it a private name, and we named it after the sound,” he said.

“The name of my band is Horses of God. And that is the way it sounds.”

Dave and the Horses of God will light up the sky on the Vegas strip beginning January 8. For more information, head to DavidLeeRoth.com.