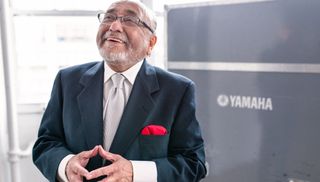 The extensive catalog of 10-time Grammy winning composer and bandleader Eddie Palmieri has broken ground in everything from jazz to salsa to funk.

It's no real surprise then, that a rock guitar legend with an eclectic, genre-bending streak of his own, Carlos Santana, would choose to collaborate with the storied composer.

Below, you can check out Guitar World's exclusive premiere of the fruits of their collaboration, the lively, intricately beautiful "Mi Congo."

"Mi Congo" is one of the highlights from the 81-year-old's Palmieri's second album of the year, Mi Luz Mayor. Recorded in honor of Palmieri’s late wife Iraida, the album features new recordings of music that the two enjoyed in their youth.

Mi Luz Mayor is set for a December 7 release. To preorder the album, step right this way.