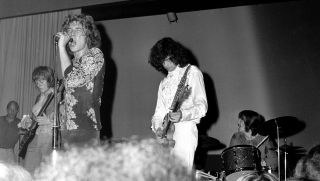 Fifty years ago today Led Zeppelin—or, as they were known at the time, The New Yardbirds—made their live debut at Teen Club, a school gymnasium in Gladsaxe, just outside of Copenhagen, Denmark.

Jimmy Page had put the new band together in the wake of the implosion of his old one, the Yardbirds, which had fractured after singer Keith Relf and drummer Jim McCarty announced they were leaving the band in mid-1968. Rather than call it a day, Page rebuilt the group with two unknown locals from England’s Black Country—20-year-old Robert Plant, and his onetime band mate in the Band of Joy, drummer John Bonham.

Rounded out by John Paul Jones, a musician Page knew from his days on the London session circuit, the group picked up the Yardbirds’ remaining contractual gigs, which consisted of a run of shows in Denmark and Sweden.

Reportedly, roughly 1,200 people attended the show in Gladsaxe. A local review of the show read:

“The English group Yardbirds had been rehearsing their new set most of the afternoon. So when they entered the scene they were really hot to get started and give it all. Their performance and their music were absolutely flawless, and the music continued to ring nicely in the ears for some time after the curtains were drawn after their show. Let me in particular give my praise to Jimmy Page who has made a great job with the 3 new men. They really succeeded and in particular the guitar solo by Jimmy Page created huge applause. We can therefore conclude that the new Yardbirds are at least as good as the old ones were.”

The pic above is from that historic first show.

The next month, the four band members would enter London’s Olympic Studios to record Led Zeppelin.

In addition, Led Zeppelin today released the remastered and expanded version of The Song Remains the Same, the 1976 soundtrack to the legendary concert film of the same name. The performances in the film were recorded July 27-29, 1973 at Madison Square Garden during the band's tour for their then-current studio album, Houses Of The Holy.

The soundtrack is available in multiple formats from Atlantic/Swan Song, including the full album's debut in hi-res 5.1 surround sound on Blu-ray. The Super Deluxe Boxed Set recreates the intricate embossing of the set's original issue, and also marks the first time the full -length film and soundtrack have been available in the same package. On the 4-LP set, Page made a change to the track sequence, allowing the epic, 29-minute version of "Dazed And Confused" to be featured in its entirety on one side of vinyl for the first time.