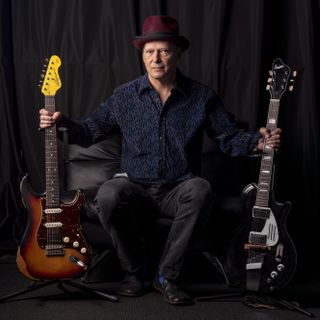 Richard Lloyd’s new solo album, The Countdown, will be released via Plowboy Records on November 2. You can listen to the first single, “Whisper,” here.

On The Countdown, Richard Lloyd creates an honest, natural expression with his stylized guitar sound and swagger. “I can only be me,” he says. “I can't turn into somebody else.

Lloyd is joined on the record by Nashville session players Dave Roe (bass) and Steve Ebe (drums). He said about The Countdown: “[E]very record I make is just a progression. I never felt the angst necessary to be a punk. I was too young to be a beatnik and too old to be a hippy. I like to say I’m an anthropologist from another planet who is observing human nature and expressing my observations through rock ’n’ roll.”

In 2010, Lloyd spoke to Guitar World about playing in Television with singer and guitarist Tom Verlaine: "There was a generosity between us, as well as a competitive spirit. So you didn’t know who was going to break out of the box. You didn’t know what to expect. That zigzag, interlocking-gear thing was something that nobody else had. Except for maybe the extremely early Rolling Stones, where you can’t tell Brian Jones from Keith Richards."

Lloyd has also played with artists ranging from Matthew Sweet to X’s John Doe, as well as released several solo efforts under his own name. His autobiography, Everything is Combustible: Television, CBGB’s and Five Decades of Rock and Roll, was published in 2017, with a second edition due in November.

You can pre-order The Countdown here.