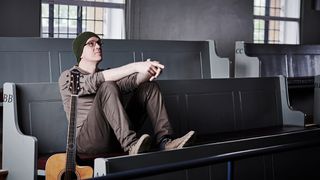 It's Friday, so you know what that means... This week's essential guitar tracks! Here's where the Guitar World team collate our favorite guitar tracks from the past week, delivering the best six-string listening material that's been hitting our collective eardrums. And given the restrictions placed upon many people at the moment, now might just be the time to expand your musical mind.

This week we’ve got everything from progressive groove-djent metal to contemporary R&B licks and even a new track from veteran rockers Deep Purple. Enjoy!

We’ve been keeping a close eye on this Nashville R&B prodigy since she first went viral back in 2017. In that time, Faye's career has seen her work with the likes of Mac DeMarco, Willow Smith and Hayley Williams, while she’s also appeared as the face of Fender’s Player Stratocaster.

All that experience is showcased in new single It’s A Moot Point, a laid-back R&B groove complete with Hendrixian rhythm work, jazz-inflected chord changes, and rapid-fire bursts of the most exquisitely phrased soul licks outside of Mateus Asato. This is the sound of guitar in 2020 - more of this, please. (MAB)

Canada’s favorite mad prog scientist was one of countless guitarists who saw their touring schedules wiped out by the coronavirus outbreak over the past few weeks. Following the launch of a GoFundMe campaign, which quickly amassed the $50,000 goal required to offset the costs of the cancelled tour, Townsend uploaded the aptly named Quarantine to say thank you.

The ethereal, pared-down recording recalls Pink Floyd at their most contemplative, but a high-gain middle-eight modulation serves as a comforting reminder that Hevy Devy ain’t going anywhere. (MAB)

This four-to-the-floor rocker is the lead-off track from the Brit-rock stalwarts’ 21st album, Whoosh!, which lands on June 12 and, rather confusingly, follows the band’s recent Long Goodbye Tour.

Although Don Airey’s synth stabs dominate the track, Morse’s percussive rhythm playing provides the unshakeable backbone - and when he gets his chance to shine, the virtuoso thrusts his Ernie Ball Music Man into epic territory, with wide, vocal bends, taken up a notch by by some cunningly employed chromatic passing notes. (MAB)

Kicking off with a characteristic slow-tempo riff, Paradise Lost’s latest single Fall from Grace develops slowly into a somber epic of melody and doom in which the guitars take center stage.

Guitarists Greg Mackintosh and Aaron Aedy showcase their fretboard dominance, trading riffs, licks and solos throughout the track’s near six-minute duration. This is gothic metal at its finest - and what a timely release. (SR)

Jim Morrison was always going to be the most iconic member of The Doors. With an electric stage presence, tabloid-ready on- and offstage antics and (for their time) radical, apocalyptic lyrics, he made The Doors much larger than life. Without the impeccable six-string skills of bandmate Robby Krieger, though, Morrison’s psychedelic poetry wouldn’t have had a fraction of its power.

Just one listen to Krieger’s new single, Slide Home, is enough to prove that - more than half a century after The Doors’ heyday - Krieger’s still got it. His slide playing on this instrumental gem is beautifully melodic, evoking a place far more blissful than our current, troubled reality. (JM)

The Tempest comes ahead of the band’s fifth full-length studio album Rise Radiant, which the band have dubbed the “culmination of their artistic development.” Should be good, then. (SR)

Sasami Ashworth’s 2019 debut album was one of the year’s best. Packed to the brim with perfectly minimalist guitar playing - there was hardly a note on the record that felt out of place - tight, powerful arrangements and uncompromisingly personal, deeply affecting lyrics, it was an album with true staying power in our age of constant media and information bombardment.

Sasami’s new, non-album single, Mess, is no different. If the no-time-for-bullshit lyrics and dreamy, almost country-ish leads that dot the first verse don’t pull you in straight away, the tasty, fuzz-drenched solo that injects itself into the song less than a minute in certainly will. (JM)

Upon A Burning Body - Built from War

Texan four-piece Upon a Burning Body's Built from War is a driving metal freight train that’s certain to whet the appetite of any rock-inclined guitarist.

Resident axeman Ruben Alvarez puts on a furious display of fiery fretwork in the form of face-melting guitar solos and pounding drop-tuned riffs, instrumentally bolstering the song’s lyrical call-to-arms and solidifying the track as a true heavy-metal home run. (SR)

Progressive groove-djent metal makes a welcome appearance in this week’s list, courtesy of British quartet Shattered Skies. Born of Solder features some of the most impressively tight playing we’ve heard in a while, with guitar and bass riffs in perfect synergy, mind-bending beats and a catchy melodic chorus vocal that fits surprisingly well with the instrumental section.

Tap-happy guitarist Ian Rockett uses a Strandberg to deploy his arsenal of leads - a brand that’s, to say the least, well-regarded amongst the community’s more prog-inclined players. (SR)