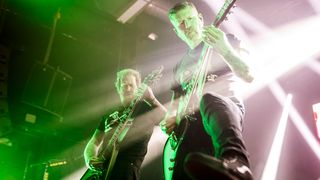 Another seven days have passed since last week’s essential guitar tracks. Can you believe it?! No, neither can we.

Thankfully, there’s an astonishing amount of guitar goodness to nudge in your direction, including a bevy of Bill & Ted soundtrack, erm, tracks, hot new shred, indie delights, and as always, a hefty slab of metal.

So, that’s it. There’s your intro. Now, get to listening. Enjoy!

The momentous day has finally arrived: Bill & Ted Face the Music is here. The build-up has been full of revelations – Tosin Abasi is the movie’s resident “air shredder”, and Keanu Reeves and Alex Winter are actually bass players – and with it comes a most bodacious soundtrack indeed.

Mastodon contributed a track especially for the movie, one that drummer Brann Dailor has branded the band’s “party rockin’ song” – and it’s not hard to see why. Rufus Lives speeds along at a breathless pace, with a main riff chock-full of manic slides, high-energy powerchord chorus and none-more-wah thrash solo from Brent Hinds. (MAB)

Signed to ESP, EMG and Laney at the age of just 13, Brazilian virtuoso Luis Kalil has had a remarkable career already, and now, at the age of just 20, it looks like he’s ready to join shred’s big leagues with this scorching new single.

Kalil knows when lean back, and when to let rip, with huge seven-string riffs and infectious lead melodies bolstered by furious runs and a blazing vibrato. And that’s not to mention a certain Mr Angel Vivaldi, who crops up at the four-minute mark with an indisputable face-melter, complete with tap slides. (MAB)

Lamb of God - The Death of Us

Fresh off the back of their ground-shaking new self-titled album back in June, the Virginia five-piece have dropped a new song, entitled The Death of Us.

The track, which was also written for the soundtrack of Bill & Ted Face the Music, is another quintessentially LoG metal banger, complete with those Phrygian riffs we’ve come to love of the groove-metal giants. We can’t wait to see how this sonic freight train fits into the movie. (SR)

Having built a tremendous amount of anticipation with a beguiling string of one-off singles dating all the way back to 2017, New York-based singer/songwriter Samia Finnerty finally gifted us her debut album, The Baby, today.

Definitely be sure to listen to the whole thing, but for a taster, give the devastating Triptych a spin.

Pulsating acoustic strums underline Samia’s tear-off-the-facade lyrics in a manner that echoes Elliot Smith, but then the song really kicks off. The touches of electric guitar move almost subliminally from supremely understated to a blinding display of color that could fill a whole city before you realize anything’s happened.

All the while, Samia completely commands the whole journey with a vocal performance that soars and snaps you brutally back to ground-level with equal conviction. Enjoy the ride, she’s just getting started. (JM)

This article wouldn’t be complete without your weekly dose of metalcore, now, would it? From Birmingham, Alabama quintet ERRA comes Snowblood, a modern, electronic-influenced heavy-hitter that’ll have you yearning for the days in which you could mosh with no mind paid to social distancing.

With technically impressive guitar work courtesy of six-stringers Jesse Cash and Sean Price, as well as brutal vocals and thunderous sticksmanship from J.T. Cavey and Alex Bellew respectively, this one’s a sonic onslaught from the outset. (SR)

The Struts – Another Hit of Showmanship (feat. Albert Hammond Jr)

What do you when you want to inject your spritely rocker with a bit of Strokes-y attitude and charm? Call up one of the Strokes, of course!

Standing tall with a propulsive bassline, booming drums and radio-conquering hooks, Another Hit of Showmanship proudly lives up to its name.

Of course, Hammond also delivers in spades, with big chording and leads that’ll have you digging through your closet for your old leather jacket. (JM)

That opening fuzz tone is really something, huh? It sets the tone for Canadian rock singer JJ Wilde’s addictive new single, an ode to freedom of expression.

Best Boy captures the best of the Black Keys/Jack White zeitgeist, with raw, fiery tones bolstered by big hooks and chunky rhythms, and a positive message of empowerment. We dig. (MAB)

Blue Öyster Cult - That Was Me

Featuring a killer riff from the get-go, this new track from the NYC classic rockers has us super-excited for their upcoming album The Symbol Remains - which, notably, is the group’s first studio record in 19 years.

Keep an eye out at the 2:05 mark for a rather avant-garde-sounding, chromatic-flavored guitar solo, and mark your calendar for October 9, as there’ll be more where this came from. (SR)

YouTube fave and alternate-tuning maverick Ichika is back with another blink-and-you’ll-miss-it single. While the track is called Branching Paths, he’s given it the YT header ‘New Style of Music Genre’, which is a pretty bold assertion indeed.

What that actually means is a whistle-stop tour of contemporary guitar playing, spanning djent, prog and neo-soul, and a worthy showcase of Ichika’s phenomenal legato, slap and tap chops. It’s a bit like Polyphia on speed. Which, to be honest, is a hell of a lot of fun. (MAB)

Powerman 5000 - Cannibal Killers That Kill Everyone

This track is a drop in the bucket in terms of the creativity you’ll find on the rest of the record, which is well worth diving into. (SR)

Orchid Mantis - Within and Apart

Atlanta musician Thomas Howard has quietly been releasing full albums worth of some of the best hazy, sepia-toned bedroom pop on planet Earth for a few years now, but his new single, Within and Apart, might be his most accessible, and exciting, work to date.

Though it’s as conversational and intimate as any of his other music, Within and Apart surfs a wave of nervy, intertwining guitars could just as easily set a crowd of thousands ablaze with excitement as any delay-laden riff from The Edge’s hands.

Within and Apart is the first single from as an as-yet-untitled full-length, set for release later this year. We’ll be counting down the days. (JM)

As his estate digs ever deeper into the Purple One’s vaults, Prince continues to surprise. This week saw the release of an in-progress version of this classic Sign "O" the Times cut – and it showcases Prince’s guitar skills at their stripped-down best.

This early rendition – before His Royal Badness equipped the track with its sparse synth ’n’ drum machine aesthetic – harks back to vintage blues, with gentle acoustic strums and some delicious 7th chords, before Prince takes it on home with an altogether funkier rhythm and some smooth pentatonic fills to close out the demo. (MAB)