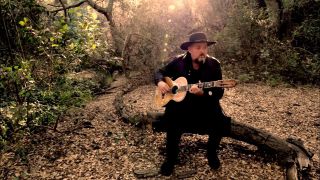 Though it may not quite feel like it exists anymore, time - oblivious to the coronavirus and its devastating effects - continues to march on. That does mean though, that today - in case you’ve understandably lost track - is Friday. And what does that mean? Tracks of the week!

Artists and musicians around the world have been quite generous during this difficult period - live-streaming performances from their home studios or living rooms, moving the release of killer new albums and tracks up to the spring or, in some cases, dusting off some amazing songs that were left on the cutting room floor and sharing them with fans. This week was no exception, with a number of guitar-heavy gems, new and old, coming to light.

Whether it’s classic, heavy-duty riffing, pristine acoustic beauty or right-on-the-money pop-punk hooks from a surprising source that float your boat, you’ll almost certainly find something in this here playlist to put on repeat.

So sit back, turn your speakers up and enjoy - you’ve earned it.

Historically, when you think Machine Gun Kelly, all that springs to mind is rap and hip-hop. However, as we saw with 2019’s I Think I’m OKAY (with YUNGBLUD and Travis Barker), the Cleveland lyricist has begun dabbling in a far more guitar-inclusive pop-punk sound, trading electronic beats for acoustic drums and gain-laden electric guitars.

In a new interview with Zane Lowe, the rapper said, “I hope this album inspires some kids to pick a guitar up, because it’s uncommon for a 15-year-old to have been to a concert where anyone’s playing an instrument.” An interesting insight, and a promising change of direction for such a mainstream artist. (SR)

Man, who saw this one coming? Yes, it’s only a demo, but who’s better for these times than the man who took an entire generation’s hopes and dreams, painted them onto a widescreen canvas and gave them shape through some of the most impossibly brilliant and well-put-together riffs and hooks this side of The Beatles and Stones?

Don’t Stop is all Noel Gallagher, quite literally, and while the absence of his brother Liam's sneer and bulldozing attitude keeps it from completely taking flight, Gallagher doesn’t need a supporting cast to make this track as evocative as it is.

At a time like this, who isn’t dreaming of a life where they can be guided by “lazy days and sunny rays” or “feast on the stars in the sky”? With Gallagher’s audible-in-the-cheap-seats, meme-inspiring acoustic strumming, plus some tasty, country-tinted leads, crank this one up and let your brain mosey on over to your happy place. (JM)

Alain Johannes is one of guitar’s all-time underrated greats, and now the sideman for QOTSA, Them Crooked Vultures, Chris Cornell and many more steps into the limelight once more with the first, self-titled single from his forthcoming solo album, Hum.

Rather than the fuzz fury that characterizes much of his collaborative efforts, Hum rests upon Johannes’ equally accomplished fingerpicking, in an exquisite acoustic track that harks back to Nick Drake’s Pink Moon - and carries just as much emotional depth. (MAB)

Firewind - Welcome to the Empire

The track is also a prime example of the sheer production quality we hear in modern metal music, with every element popping with pristine detail. If you’re a bedroom guitarist/producer, this track will certainly keep you satisfied for a while. (SR)

Big Thief - Love In Mine

It’s official, Big Thief have officially reached ‘their B-sides go toe-to-toe with most bands’ A-sides' status. Recorded during the sessions that produced their (second) masterful 2019 album, Two Hands, Love in Mine melds the raw, first-take, spur-of-the-moment genius that permeated Two Hands with the stunning, transcendent psych-folk journeys of their other 2019 masterpiece, U.F.O.F.

Adrianne Lenker’s acoustic riff here is more than a little reminiscent of the one that powers Fleetwood Mac's Landslide, but is no less moving. As ever, Lenker and guitarist Buck Meek have an innate sense of how to answer and complement one another with their playing, and here, there's not an out-of-place note to be found between the two of them. (JM)

The Californian extreme metallers strike once again with this previously unreleased B-side track from their 2020 album Become The Hunter. Everything we know and love Suicide Silence for - obscenely drop-tuned guitars, guttural vocals and pit-spinning breakdown sections - is on full display here, offering the band’s legions of fans a fresh dose of heaviness during these tough times.

The fine work of guitar duo Chris Garza and Mark Heylmun leaves us wondering why this track was omitted from the album in the first place. But that doesn’t matter now, as it’s out for the world to see, and we’re loving it. (SR)

The Scottish post-rock institution surprise-released a new album on Bandcamp today - the soundtrack to Amazon Prime series ZeroZeroZero - with a pay-what-you-can price structure to raise funds for Help Musicians and the UK NHS charities.

This is far from the band’s first soundtrack rodeo, and accordingly, Visit Me demonstrates a masterful use of guitar textures, as shimmering clean tones build to a cacophony of trademark heavy-feedback delay pedal-aided tremolo picking. As with a lot of the band’s score work, it’s an uncomfortable listen, and a thoroughly immersive one, too. (MAB)

Germany’s premier classic-rock outfit may be hard at work on their 19th album, but they’ve taken a little time out from their recording schedule to wish the world well in these troubled times.

Sign of Hope is in the vein of Scorpions ballads like Winds of Change and The Best is Yet to Come, with a simple, stripped-back arrangement of electric and acoustic guitars peppered with sparse single-coil leads - but never fear: the band promises they are working on “lots of hard ’n’ heavy rockers” for their upcoming release. (MAB)