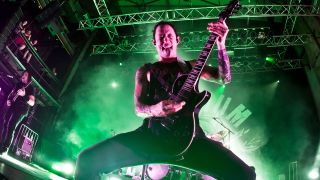 It's Friday, and that means tracks of the week time here at GW towers - we've been keeping our collective ears to the ground to bring you the hottest guitar cuts to land over the past seven days.

This week marked major releases from two of metal's biggest bands - Trivium and Five Finger Death Punch - fresh fusion courtesy of jazz master Pat Metheny, and a host of ambient delights from both sides of the Atlantic.

Looking to expand your six-string listening habits? Dive in below...

This six-and-a-half-minute epic is the lead single from the metal favorites' upcoming ninth studio album, What the Dead Men Say. Their first material in almost three years, Catastrophist encapsulates everything we love about contemporary Trivium, as guitarists Matt Heafy and Corey Beaulieu deliver all the six-string firepower they're packing in their arsenal of shred.

With chugging mid-tempo riffs, multi-guitar harmonies and the obligatory face-melting solos, this meandering masterpiece serves as a reminder that after 21 years, Trivium remain one of the frontrunners of the (not so) New Wave of American Heavy Metal. (SR)

Hamish Anderson - You Give Me Something

The Aussie blues-rocker ditches his trademark Tele to don a Les Paul for this sleazy classic-rocker - Anderson describes it as a cross between John Lee Hooker and Marc Bolan, and we're of mind to agree.

That cranked Analogman Sunface Fuzz lends the track an altogether scuzzier edge, too, particularly on the furious outro solo. (MAB)

Soccer Mommy - Yellow Is the Color of Her Eyes

Our favorite artist named after a fictitious Simpsons movie skit, Soccer Mommy, aka Sophie Allison, has served up some of the dreamiest confessional guitar pop this side of Snail Mail. Second album proper Color Theory arrived this week, and although it officially cropped up on YouTube three months ago, Yellow Is the Color of Her Eyes has to be the six-string highlight.

The Las Vegas heavy-metal juggernaut today released their eighth studio album - the suitably titled F8. With all the bulldozer riffs and solos you'd expect from the super-tight Hook/Bathory duo, there are a plethora of notable and memorable guitar moments.

None more so however, than the riff which kicks about 10 seconds into the album's 10th track, This Is War. Perhaps a more virtuosic performance than we're used to hearing from Jason Hook, this one sets the stage for one of the record's most brutal moments. (SR)

One of the OGs of jazz-fusion proves he is still an absolute master of his craft on just-released new album From This Place. Same River is the perfect example of how to do dynamic, atmospheric jazz - and even (whisper it) a synth-guitar solo - right.

The slightly behind-the-beat phrasing, that sitar-like tone, the orchestral rises… It could only be Metheny. (MAB)

This UK-based post-metal quartet certainly live up to their name, as they deliver exactly the kind of widescreen doom-sludge we had in mind for a Friday morning.

Fans of Russian Circles, Pelican and blastbeats will be all over the band’s new single, which layers ominous reverb over guttural chugs to devastating effect. (MAB)

Lanterns On The Lake – Baddies

Baddies is a perfect example, characterized by swathes of spring reverb and staccato stabs. The track’s tone may be subdued, but the playing is full of fire. (MAB)