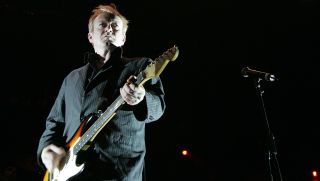 Andy Gill passed away on February 1 on this year. But thankfully it seems we haven’t heard the last from the iconic Gang of Four electric guitar player.

Gang of Four are set to release Anti Hero, a collection of the band’s final recordings with the guitarist and songwriter, on July 17. In addition, the band has unveiled the first song from the EP, Forever Starts Now, co-written by Gill and Gang of Four vocalist John Sterry.

Along with Sterry, the EP features Gang of Four bassist Thomas McNeice and drummer Tobias Humble, who joined together with Gill’s widow, author and Women’s Equality party co-founder Catherine Mayer on the project.

According to Mayer, Gill “was working on this music and overseeing mixes from his hospital bed until literally the last day when they put him under.”

All proceeds from the EP will benefit Guy’s and St Thomas’ NHS foundation trust, which benefits the hospital that treated and cared for Gill during his illness.

The cover art features a portrait of Gill designed by artist Shepard Fairey, who said in a statement:

“Gang of Four has been a profound inspiration for me because the band demonstrates that great art can powerfully merge pleasure and intellectual provocation.

“I was devastated to hear of Andy Gill’s passing, but honored to make a portrait of him in the hope of creating an iconic image of one of my heroes - with apologies to Andy, to me he was a hero - to serve as a reminder that though life may be fleeting, Andy’s potent art and ideas will endure.”

You can listen to Forever Starts Now above. A second single from Anti Hero, Day Turns to Night, will be released on June 26.

For more on Andy Gill, read our in-depth tribute on his genius, and how he influenced a generation of guitarists.