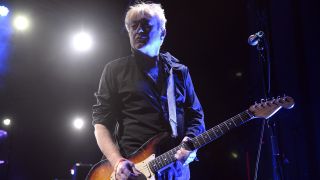 The news was announced via the band’s social media, which stated, “Our great friend and Supreme Leader has died today.

“His uncompromising artistic vision and commitment to the cause meant that he was still listening to mixes for the upcoming record, whilst planning the next tour from his hospital bed.”

No cause of death was announced.

In 2018, Gill told Guitar World of his signature sound, “I don’t really spend time thinking about the guitar tone. I tend to just plug it in and play with a few tremolo effects, tweak a few things and then off we go.”

Rage Against The Machine guitarist Tom Morello paid tribute to Gill on social media, saying, “[He was] one of my principal influences on the instrument as his jagged plague disco raptor attack industrial funk deconstructed guitar anti-hero sonics and fierce poetic radical intellect were formative for me.”

So sorry to hear of the passing of the great #AndyGill, guitarist of Gang of Four. One of my principal influences on the instrument as his jagged plague disco raptor attack industrial funk deconstructed guitar anti-hero sonics and fierce poetic radical intellect were formative for me. So glad I got to see him and revel in his incendiary art and wry wit several times over the past year. He was really, really fucking great. Tom Morello

Prior to Gill’s death, Gang Of Four had just finished a new studio record, and completed their final tour in November 2019.