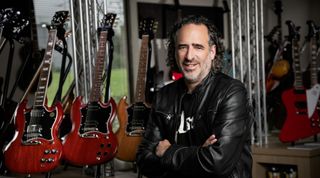 The company also announced the hiring of Cesar Gueikian as CMO (chief merchant officer), Kim Mattoon as CFO (chief financial officer) and Christian Schmitz as CPO (chief production officer), all of which are effective from November 1.

The hiring of the new leadership team follows the departure of embattled former CEO Henry Juszkiewicz, who departed the company earlier this month as part of the company's post-bankruptcy restructuring plan.

“As a musician, I have always treasured my Gibson guitars and I have the utmost respect for the iconic Gibson brand and those who choose to play Gibson guitars,” Curleigh said in a statement. “Gibson has been a pioneer of craftsmanship and innovation in musical instruments and has been synonymous with shaping the sounds of generations and genres for more than 100 years. I am very honored to play a leading role with this iconic brand.

“As a business leader and a brand builder, this is the beginning of a new era for Gibson that will build on its proven heritage and iconic status," Curleigh continued. "We are focusing on the future and off to a fresh start, with a strong financial foundation, a committed and experienced new leadership team and new ownership that is equally passionate about the brand.

"As the industry leader, we have an opportunity and an obligation to set the best conditions for success for our brands, our fans, our partners and our own extended team. I look forward to leading Gibson confidently into the future.”

Gibson—which was founded in 1894, and sells over 170,000 guitars annually in 80 countries—filed for bankruptcy in May, after the company's unsuccessful expansion into the consumer electronics business left it almost $500 million in debt.