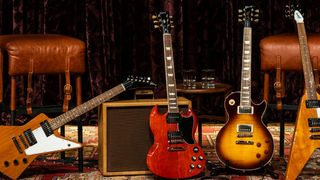 A Chapter 11 plan approved on October 2 will see bondholders take over Gibson. The legendary brand filed for bankruptcy protection this past May, following Gibson CEO Henry Juszkiewicz’s 2014 purchase of Koninklijke Philips NV for $135 million, which led to a failed relaunch of the guitar maker as a “music lifestyle” company.

After facing more than $500 million in debt, a plan is now in place to use “as much as $70 million to galvanize [Gibson’s] ‘business plan for growth,’ ” according to Billboard.

Gibson will be run by bondholders that include Kohlberg Kravis Roberts & Co. (KKR) and Melody Capital, with Juszkiewicz and co-owner Dave Berryman’s equity stakes cancelled.

Nat Zilkha, KKR’s head of alternative credit, will be among the restructured company’s new board members. Zilkha told Bloomberg: “For us, establishing the credibility that we intend to deliver is important. We are musicians. We care deeply about the brand and we are going to protect it.”

Following the initial Chapter 11 filing in May, Gibson opted to shift its focus back to guitars. "The decision to re-focus on our core business, musical instruments, combined with the significant support from our noteholders, we believe will assure the company's long-term stability and financial health," Juszkiewicz said in a statement at the time.

As of press time, a new Gibson CEO has not been formally named.