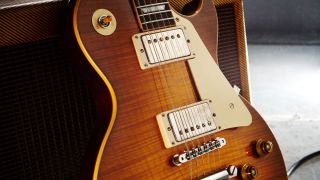 Gibson has announced that Tom Murphy, a pioneer in the world of electric guitar relic work, has joined the company to head up the newly-created Murphy Lab, which will function as a division of the Gibson Custom Shop focused on building historically accurate guitars.

In his role as Master Artisan, Murphy will lead the Lab in “re-imagining and implementing new ways of delivering the Gibson Custom Shop historic experience.”

Said Gibson CMO Cesar Gueikian, “As we celebrate the 60th anniversary of the 1959 Les Paul Standard, I can’t think of a more exciting time to launch the Murphy Lab under the leadership of Tom, who was instrumental in the inception of the Gibson Custom Shop and developed the process of aging.”

Gibson has also announced the appointment of Sergio Villanueva as Head of Custom Shop. Villanueva comes to the Custom Shop after stints at Taylor and Fender,  where he served as Senior Vice-President of Global Manufacturing.

“I am excited to bring Sergio into the Custom Shop for this leadership position at such a pivotal stage for Gibson,” said Gibson CEO James Curleigh.

“Sergio is a respected Luthier who will bring a renewed sense of artistry and operational excellence to the Custom Shop. He is the perfect fit to lead our Custom Shop team into the future.”