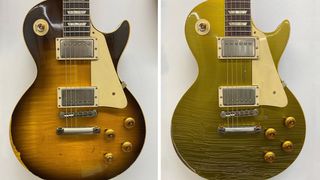 At the tail end of 2019, Gibson announced the Murphy Lab, a new division of the Gibson Custom Shop that focuses on building historically accurate guitars – and now we’ve been offered our first glimpse at these Tom Murphy-masterminded models.

The trio of LPs – two ’bursts and one goldtop – feature comprehensive checking and finish wear. And as you’d expect from Murphy – one of the original pioneers of guitar aging – the results are impressively authentic.

There’s no word on when we can expect the first of these models to be officially announced, but we’ll keep you posted.

Until then, you can admire this delectable trio…