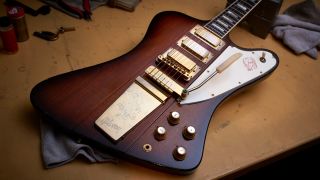 Yesterday, German guitar builder Warwick reported that Gibson had withdrawn its appeal in the EUIPO [European Union Intellectual Property Office] to own the trademarks on its Firebird body-shape design - and now Gibson has shared its side of the story.

In a statement issued to Guitar World, Gibson delivered a firm rebuttal of Warwick’s representation of the proceedings, before confirming that Firebird and Thunderbird designs are still protected in the EU.

“With regard to Gibson's Firebird design, despite the statement from Warwick, Gibson still holds several valid and enforceable rights to the Firebird design in the EU. Although there have been a number of disappointing rulings recently in the EU, invalidating such iconic designs as the Rubik's cube, Gibson has decided not to appeal the limited ruling against one of its Firebird registrations because it holds other valid registrations which protect this iconic design.”

Guitar World has reached out to Warwick for comment.