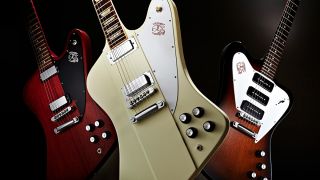 UPDATE: Gibson has now issued a response to Warwick's portrayal of the ruling.

Gibson has of late engaged in well-publicized legal proceedings with other manufacturers, most notably Dean, regarding its electric guitar designs.

Now, according to German guitar maker Warwick, Gibson has withdrawn an appeal in the EUIPO [European Union Intellectual Property Office] to own the trademarks in the EU on its Firebird and Thunderbird body shape designs.

The decision, says Warwick, was based on a motion filed by company CEO and owner Hans-Peter Wilfer.

Warwick went on to state that the EUIPO decision read in part:

“Given the fact that several other manufacturers create guitars with a similar appearance, including the applicant, it is highly unlikely that the average consumer will rely solely on the shape as registered to indicate its origin.

“They would rather look for other indications, such as a brand name, to get more information on the manufacturer of the goods. The design of the guitar would have to be a far more radical departure from the norms or customs in the sector in order to fulfill the essential function of indicating the origin of the goods for which protection is sought.

“The public is used to different shapes of electric guitars in the market.”

This ruling applies only to the guitar body shape itself, however. Gibson possesses other trademark registrations for the Firebird and Thunderbird designs, which prevent rival manufacturers from employing the models' characteristics.

Just last week, Kiesel revealed it had been issued a cease-and-desist over its Ultra V design, and intend to take the case to court. The outcome in the United States remains to be seen, but Gibson had its Flying V trademark appeal rejected in an EU court last July.