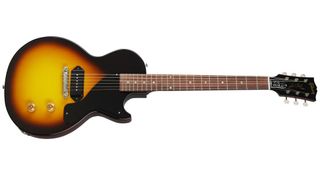 We first got a glimpse of the new signature Gibson electric guitar from Lukas Nelson - who plays with Promise of the Real, Neil Young and Willie Nelson & Family - earlier this year. Now the company has officially announced the Gibson Lukas Nelson ’56 Les Paul Junior.

The customized model was inspired by Nelson’s own ‘56 Junior, and features a single-cutaway slab mahogany body, fat ‘50s-style mahogany neck and rosewood fingerboard with dot inlays and medium jumbo frets.

The guitar comes finished in a deluxe satin Vintage Sunburst, developed to capture the same vintage patina of Nelson’s original.

Said Nelson, “The beauty of this guitar is that it is very versatile with the sound. In fact, I can get a lot of different tones just from the P-90 and the way that I attack the strings and through the intonation and the vibrato that I give. If I hit it lighter, it doesn’t break up as much. If I get into it, it gets a lot of grit and dirt and breaks up. It’s a versatile tone, which I’m pretty grateful for.

“This guitar has taken me on a long journey. It’s taken me to some amazing places, and I hope that a lot of other people get the same opportunity with their version of my guitar.”

Additionally, Nelson will take part in a live Q&A about his musical history and songwriting, as well as answer fan questions, at 5:00 PM PST on August 5.

To tune in, head to Gibson TV.