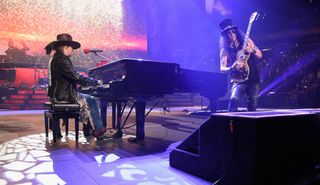 Guns N' Roses have extended the latest U.S. leg of their Not in This Lifetime tour, with eight additional dates scattered across the United States.

Beginning in late September in Charlotte, the dates will take the reunited hard-rock juggernaut across the United States—with a couple mid-October dates in Mexico for good measure.

You can check out the band's full itinerary below.

When asked last year about the potential for a new album from Guns N' Roses, Slash, who rejoined the band in 2016, told Guitar World: "There’s talk about doing some recording. I think we all would love to do something that we thought was really cool. We just haven’t really sat down and put our noses to the grindstone to do it. We haven’t really had time. But there’s been a couple things that we’ve dicked around with at soundchecks."

For tickets and more info, head on over to gunsnroses.com.