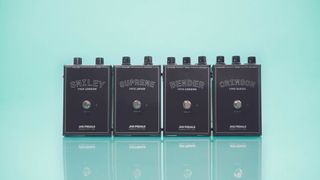 JHS Pedals has announced the Legends of Fuzz series, the company’s “tribute to the most important fuzz circuits ever made.”

And just what are those circuits? In JHS’s estimation, they encompass the 1973 Sola Sound MKIII Tonebender, the 1992 Mike Matthews Red Army Overdrive, the silicon-model Dallas-Arbiter Fuzz Face and the 1972 Univox Super-Fuzz. The company has replicated the four fuzz pedals, respectively, in its new Bender, Crimson, Smiley and Supreme stompboxes.

The Bender offers the touch, feel, and response of the vintage germanium MKIII Tonebender, “but with accuracy and consistency of carefully chosen modern silicon transistors,” while the Crimson replicates what JHS calls the very first Russian-made Big Muff ever produced, and which was “warmer, clearer and more defined than any of the Soviet Big Muffs that followed.”

The Smiley, meanwhile, is a recreation of the Hendrix-preferred silicon Fuzz Face, and is “clear and defined, straddling the line between distortion pedal and a searing sustain, sustaining low end and crisp mid-range bite.”

Finally, the Supreme approximates the sound of an “Octavia Fuzz that woke up on the wrong side of the bed: a loud, screaming, full and vibrant octave fuzz that is always at 11.”

In addition to standard controls, all four units also feature a side-mounted Mode button that accesses a never before heard “JHS Mode,” which, depending on the pedal, boosts gain, volume, fuzz, octave effect and mids.

The Bender, Crimson, Smiley and Supreme are available for $179 each.