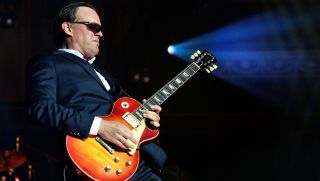 Joe Bonamassa has teased that his next studio album will be a British blues-rock record cut at Abbey Road Studios in London.

Now the indefatigable electric guitar player has shared the first fruits of his British blues-rock labors, the slide-infused A Conversation with Alice.

Said Bonamassa about A Conversation with Alice, "the song is derived by an experience I had a couple years ago when some friends of mine intervened and said, 'You know what Joe? You should go ahead and talk to someone about these problems you have that come up time and time again.' So, I agreed.

“I went to see this lovely woman in Los Angeles, CA and began talking about my problems. After the second session I came to the conclusion that I was unrepairable and that the crazy in me makes me good at my job. I like being good at my job."

He continued, "I think I'm good at my job, unless you ask the internet. Which then there's some debate, which bolsters the crazy. See how it's all interrelated? So, I wrote a song about it."

Bonamassa’s Abbey Road-recorded album is due out later this year.

In the meantime, get all your JoBo news over at JBonamassa.com.