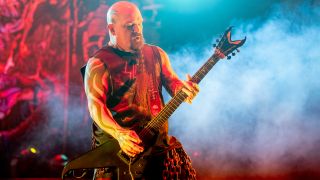 Now, we’re happy to report on the guitar’s first user and, not surprisingly, it’s Kerry King himself, who wielded the new V onstage at Slayer’s headlining show at New York’s Madison Square Garden on November 9.

Below, check out fan-filmed footage from YouTuber Jim Powers of King putting his new Dean through its paces on War Ensemble, Stain of Mind, Disciple and When the Stillness Comes. And perhaps he’s still getting used to the guitar, as he clearly struggles more than a bit with the intro to that last song - although he laughs off any mistakes.

There’s also a Kahler KFK signature bridge, Floyd Rose R2 nut and Grover tuners, and pickups are a Sustainiac at the neck and an EMG 81 with PA2 Preamp Booster at the bridge.