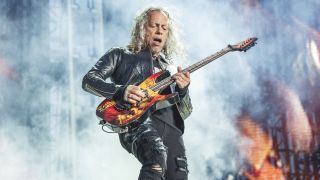 There are several guitar players who have always been closely associated with the wah wah pedal - Hendrix, Slash, the obviously named Wah Wah Watson. And without a doubt Metallica’s Kirk Hammett is an avowed member of that club.

As for what first turned him on to the effect pedal? Thanks to our friends at Guitar Player, we now know.

In a recently unearthed Hammett interview, the guitarist discusses five solos that changed his life. And one of them, Brian Robertson’s lead in Thin Lizzy’s 1976 song Warriors, also introduced him to his favorite effect.

Said Hammett, “This solo was the first time I’d ever heard a wah pedal. I remember that when that sound came out of the speakers, it startled me.

He continued, "The one guy that I’ve always thought did not get enough credit was Brian Robertson, and his style and feel is something that I aspire to."

In a 2013 interview with Songfacts, Thin Lizzy co-guitarist Scott Gorham discussed writing Warriors: “[T]hat's just a lick and a chord pattern that I had,” he said.

“We were at a rehearsal and I just started playing it. Phil [Lynott] looked up and said, ‘What's that?’ And I said, ‘Well, it's a riff and a groove I have.’ He goes, ‘Okay, man. Let's try to develop that.’ And he and I, we just sat down and started developing it, put the different licks in there.

“We'd developed a solo spot and I said, ‘I think Brian Robertson will be perfect for this, rather than my guitar.’ That's how that song came about, with Phil perking up his ears when I started to play the opening line for that particular song, Warriors.”

Next time you hear Kirk wah through Enter Sandman or any number of ‘tallica tunes, you know who to thank. It's also one of the few effects to make it past the band‘s "tone police", who Hammett recently claimed are responsible for shooting his ideas down all the time.