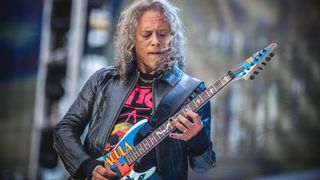 Best of 2019: Although he’s best known for his wah-happy electric guitar solos in Metallica, Kirk Hammett enjoys playing much more than just metal - who could forget the times he covered Kool & the Gang, Prince and A-Ha?

Yet the thrash legend has revealed his bandmates aren’t always so open to his outside influences, during a conversation with huge Metallica fan and 21st-century guitar hero St Vincent (aka Annie Clark), as part of Rolling Stone’s Musicians on Musicians series.

“I always feel like I have so much more to say on [each] album, but I can’t say it,” Hammett begins.

“It’s crazy, because I’m so curious about music in general. I can play a lot of different stuff. I’ll play some jazz, bossa nova, blues, gypsy jazz, fucking Eastern European ballads. I play all that stuff. But no one knows I can play this stuff. It’s so crazy.

“I’m always trying to sneak in jazz voicings and chords, little techniques here and there in Metallica.”

Got a chance to spend some time with this great person yesterday! Always interesting, @st_vincent ⚡️🖤⚡️ #makemoremusic Kirk Hammett

But when Clark asks whether he gets shot down, Hammett responds, “All the time. ‘That sounds too bluesy.’ And I’m like, ‘Fucking hell, it’s just a slide. All right, whatever, tone police.’ But you need tone police. Tone is super-important.”

Of course, Hammett - who has myriad signature guitars, owns his own pedal company, bought Peter Green’s '59 Les Paul and once sold a Dumble because it didn’t sound “kickass” enough - knows the importance of tone.

But his songwriting impact on Metallica’s latest release, 2016’s Hardwired… To Self-Destruct, was minimal after he lost his phone containing around 300 riffs - and following these comments, it sounds like not all of his solo ideas made the cut, either.

If you want to cheer Hammett up and see how solos outside of the metal giants, take a look at his guide to playing like Stevie Ray Vaughan. (Yes, really.)