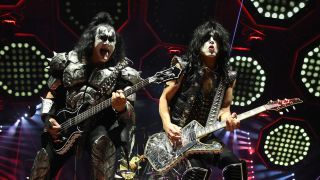 Kiss have been out on the End of the Road tour for more than a year now, and they’ve already announced the date of what is being billed as their last-ever show – July 17, 2021 in New York City.

“We want to celebrate everybody and we might bring out all the former members. We’d like to. Nobody says we hate this guy; we hate that guy; we want everybody who wants to come out.”

As for whether it’ll actually happen? In a Guitar World cover story last year, Simmons was asked this very same question, and his response caused, well, some waves.

Regarding original members Peter Criss and Ace Frehley, he said:

“Would we welcome Ace or Peter to jump up onstage for a song or two? Of course. Could we depend on either Ace or Peter to do a full set night after night? Not on your fucking life.”

His reasoning? “So life doesn’t give you three chances. You get one chance. But Ace and Peter have gotten three chances. They were in and out of the band - fired - three times. For bad behavior, being unprofessional… all the clichés are clichés. So the only reason Ace and Peter were let go the first time, and then the second time and then the third time, is that they weren’t carrying their load.”

Frehley, for his part, hit back on social media, stating that Simmons and Stanley are “control freaks, untrustworthy and too difficult to work with.”

“Can he come to the shows? Of course! Anybody can. But onstage? Never.”

One of Vincent’s successors, Bruce Kulick, however, fared much better in Simmons’ estimation.

“I can never say anything bad about Bruce. Total professional. Great guitar player. Just a real stand-up guy. I would call him a friend.”

Stayed tuned to see if all current and former Kiss men will, as Doc hinted, get up onstage to Shout It Out Loud together. One thing’s for sure – if it were to happen, it would be Hotter Than Hell.