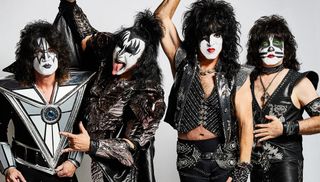 Kiss have announced the release of a new greatest hits package, Kissworld—The Best of Kiss. The set is out January 25 via UMe on CD and digital, with standard black vinyl and limited edition color vinyl released on March 29.

The new package is timed to coincide with the kickoff of Kiss’ End of the Road final tour, which begins January 31 in Vancouver.

Kiss initially announced the End of the Road tour during an appearance on NBC’s America’s Got Talent in September.

"This is gonna be our last tour," singer and guitarist Paul Stanley said following their performance of “Detroit Rock City" on the show. "It will be the most explosive, biggest show we've ever done. People who love us, come see us. If you've never seen us, this is the time. This will be the show."

Kissworld—The Best of Kiss is available for pre-order here. You can check out the album art and track list below.