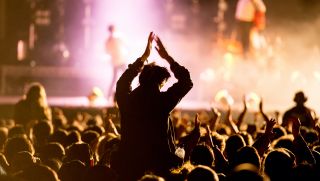 The coronavirus pandemic has put the live music industry into full shutdown mode for the foreseeable future.

As for how long the stop will last, and how the industry will eventually restart, Michael Rapino, CEO for global concert promoter Live Nation, laid out some of his ideas in a recent quarterly earnings call.

According to Rapino, via Variety, his company’s goal is to be at full-scale operations by mid-to-late 2021.

As for how this will happen, he said that over the next six months, “we’ll be starting slow and small, focusing on the basics and testing regionally.” This will include “dabbl(ing) in fan-less concerts with broadcasts and reduced-capacity shows, because we can make the math work,” he said.

“There are a lot of great artists that can sell out an arena, but they’ll do higher-end theaters or clubs,” Rapino continued. “So you’re gonna see us [gradually reopening] in different countries, whether it’s Finland, Asia, Hong Kong - certain markets are farther ahead [in the recovery process].

“Over the summer there will be testing happening, whether it’s fan-less concerts, which offer great broadcast opportunities and are really important for our sponsorship business; drive-in concerts, which we’re going to test and roll out and we’re having some success with; or reduced-capacity festival concerts, which could be outdoors in a theater on a large stadium floor, where there’s enough room to be safe.”

In the fall, Rapino continued, he could envision markets around the world reopening if there are no second hotspots.

“So I think in the fall you’ll see more experimenting and more shows happening in a theater setting, into some arenas," Rapino said.

"And then our goal is really to be on sale in the third and fourth quarters for 2021 at full scale.”