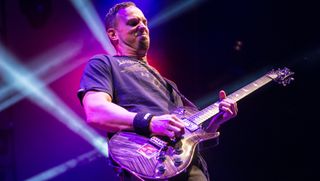 Mark Tremonti once stated that Eric Gales “could be the best guitar player on Earth.” And now it looks like the Alter Bridge electric guitar player is going to get the opportunity to collaborate with the great bluesman.

In a recent interview with Metal Wani, Tremonti was asked about upcoming projects, to which he responded:

"Right at the moment, I'm looking into writing a song with Eric Gales. He's one of my favorite guitar players in the world and he's doing a record that, I believe, Joe Bonamassa is producing.

“He had asked me, we had talked about doing a song together, so I'm trying to tackle that at the moment."

In a recent exclusive interview with Guitar World, Gales revealed some details about that Bonamassa-produced album, which is set to be mostly originals, with “definitely one cover song.”

He continued, “Me and Joe are chatting every other day about the approach and everything. I’ve got some very dope guest appearances and some people involved with this record that are gonna be a surprise to the world, so I can tell you it’s going to be amazing.”

As for what Tremonti loves about Gales?

“If there was ever the ultimate head-cutter in any head-cutting guitar competition, he’d be the king,” Tremonti said. “I’ve never seen him play with another guitarist and not shine. He’s the one that makes you drop your jaw.

“The first time I heard about him was when our drum tech way back said I should give Eric a listen while I was listening to the band Cry Of Love. He gave me his whole story and then I listened to the music and was blown away.

“Since then, YouTube’s blown up so you can check it all out there. He’s so inspiring, this Jimi Hendrix-style upside-down player. He’s really terrifying.”