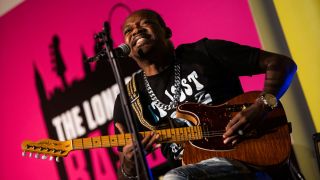 Eric Gales is one of the biggest names in electric guitar right now, having recently been hailed as the best guitarist on the planet by the likes of Joe Bonamassa and Mark Tremonti, and his star is set to shine even brighter with the surprise announcement that he’s working on an album with none other than Bonamassa himself.

Gales used his performance at the UK Guitar Show and London Bass Guitar Show this past weekend to break the news, where he revealed Bonamassa is onboard to produce and perform on the effort, ahead of a joint Joe Bonamassa/Eric Gales tour, most likely towards the end of 2020.

We managed to grab Gales following his performance to get the lowdown on what’s set to be the blues record of the decade.

“All I can tell you at this point is it’s already making out to be a serious explosion for 2020,” says Gales.

“Me and Joe are chatting every other day about the approach and everything. I’ve got some very dope guest appearances and some people involved with this record that are gonna be a surprise to the world, so I can tell you it’s going to be amazing.”

Gales went on to reveal that the sessions are scheduled to begin in late-March at Ocean Way, Nashville, with other recording locations also being mooted.

The album is set to be mostly originals, with “definitely one cover song,” says Gales. “I can’t say what it is right now, but it’s going to be fun!”

It’s “very possible” that the joint headline tour could take place during 2020’s closing months, Gales teased, even jokingly suggesting a run of five nights at the Royal Albert Hall.

For the UK Guitar Show audience, the shock announcement wasn’t even the highlight of Gales’ performance, which saw the highly lauded bluesman improvise the majority of his set to jaw-dropping effect, before calling up bandmate and virtuoso bassist Cody Wright to trade licks on an astonishing rendition of Little Wing.

Gales joined a star-studded roster of artists at the show, including Paul Gilbert, Devin Townsend and Lari Basilio, alongside a who’s who of gear companies and the Guitarist of the Year finals at London’s Business Design Centre.

The UK Guitar Show and London Bass Guitar Show will return next September. Stay tuned for more news on Guitarist of the Year very soon...