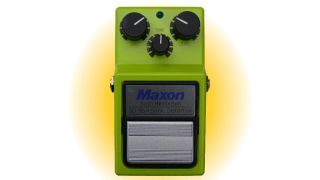 Maxon has unveiled some impressive distortion pedals over the past year, including the Apex 808 and the Robert Keeley-Modded 40th Anniversary OD808.

Now, the company is continuing down the ol’ dirt road with the new Scott Henderson SD-9SH, which updates the SD-9 Sonic Distortion, a unit Henderson has called “the best distortion pedal ever made.”

Engineered by Tube Screamer designer Susumu Tamura, the SD-9SH boasts the same three-knob layout (distortion, tone and level) as its predecessor, but with Henderson-suggested improvements, which include reducing the treble response and shifting the center frequency of the shelving filter in order to accentuate lower mids.

An additional output level has also been added to help balance the output signal with other pedals.

For more information on the SD-9SH, head to Godlyke Distributing.