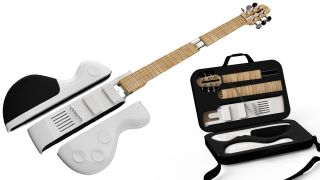 French musical instrument company Reveho has introduced the Slite, a modular, collapsible electric guitar with a built-in amp and effects.

The Slite fits inside a laptop-sized case and can be assembled, according to Reveho, in just 20 seconds.

Features include a plastic-shell body with an aluminum frame, a fully collapsible, two-piece maple neck with a 24-fret fingerboard and adjustable truss rod and individual fully-adjustable bridges.

There’s also the ability to swap out pickups, as well an option for a built-in 15-watt amp with an onboard speaker and headphone out and an effect module, making the guitar an all-in-one package.

Slite is offered via a Kickstarter campaign. There is a choice of a base package with standard guitar controls and the built-in amp for extended playability.

For more information, head to Reveho.