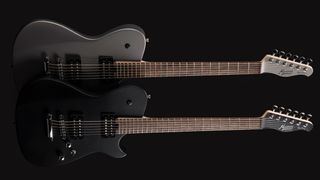 NAMM 2020: British luthier Manson Guitars has unveiled its first guitar under the leadership of new owner Matthew Bellamy: an affordable signature model for the Muse frontman.

This new electric guitar heralds the launch of the company’s META Series, which aims to bring Manson’s quality and design down to an affordable price point - so we can expect more in the future.

Like the company’s previous MBC-1, the guitar will be built by Cort, but this time bears Manson and Bellamy’s signature on the front of the headstock, and Cort on the rear.

Available in Satin Black and Starlight Silver, the Meta Series MBM-1 features a maple neck with satin finish, as well as a basswood body, and Manson-designed bridge humbucker and new neck humbucker. And yes, a kill switch appears on the body, too.

Best of all is the price, which comes in at $899/£569 and - given the quality of Manson, Cort and Bellamy’s previous collaborations - should make this model one of the highlights of the show.