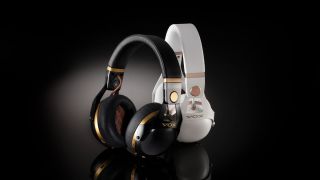 NAMM 2020: Vox has followed the likes of Marshall and Orange and launched its own pair of headphones - with some notable technological advancements over its fellow amp brands.

The VH-Q1 not only packs active noise cancelling and Bluetooth connectivity, but also attenuation for loud environments.

According to Vox, the headphones are able to isolate the frequencies of your acoustic guitar or voice and remove other noises; you can then jam along to a backing track via Bluetooth or 3.5mm cable and balance the volume of your instrument and the track.

The VH-Q1 also boasts microphones on the inside and outside of the ear cup that suppress frequencies and auto-adjust according to the sound environment.

Other features include Google Assistant and Siri, as well as a tactile responsive earcup, which allows you to tap to deactivate sound for one or both ears.

Vox even goes on to say an adaptable ear cushion and special frame structure further improve noise isolation, while the cans come in two finishes: black/gold and white/pink gold.

There’s no price or availability confirmed for these yet other than ‘2020’, but it sounds like these could be a useful accessory for style-conscious guitarists who enjoy recording with cranked amps.