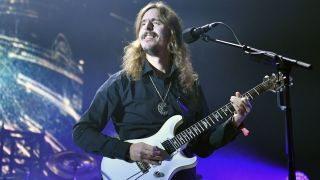 As a self-avowed music and guitar nerd, Opeth frontman/electric guitar wizard Mikael Åkerfeldt always makes for an excellent interviewee, and now one of the most important voices in contemporary prog has shared his thoughts on fellow countryman Yngwie Malmsteen… and he certainly didn’t hold back.

“I hate him as much as I love him,” Åkerfeldt told MusicRadar. “I just want to shake him around, kick him in the ass and make him wake up to something. He is fantastic and he knows it. He has the most beautiful tone of all heavy metal guitar players, bar Fredrik [Åkesson, Åkerfeldt’s partner in tone]!

“I saw his latest video for his blues album, which I thought was appalling, cruising down the Miami streets in his Ferrari. That’s not what I think of when I think of blues. It’s pretty horrible.

“His records have been pretty fuckin’ shit for a long time, but the guitar playing has always been great. The last one I loved was Odyssey, but now I just sound like a disgruntled Opeth fan. After that, he went a bit cheesy and got really bad.

“I feel like he should take care of his career better and maybe calm down a bit, focus on writing great songs. He’s not giving himself the credit he is due; he just wants to carry on playing neoclassical at full distortion. But I still love him!”