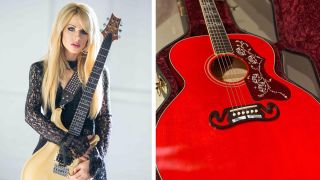 Orianthi has long been associated with PRS electric guitars, but she recently dropped the news that she also has a new acoustic collaboration with Gibson in the works, writing on Instagram, “Couldn’t be more excited about my new signature @gibsonguitar acoustic.. will be available soon.”

From the looks of it, the new model, which is touted as having “first-of-its-kind engineering,” features custom appointments including a striking red finish and custom fingerboard, bridge and headstock inlays.

While we await the official launch of the guitar, Orianthi has also announced a new studio album, her first in seven years, as well as her debut offering with new label Frontiers Music SRL. The as-yet-untitled album is scheduled for release later in 2020.

“I am thrilled about this new chapter with Frontiers,” Orianthi said. “Their passion and enthusiasm for music is such a great reminder of why I love creating music. I couldn’t be more excited to release my upcoming album with them.”

Stay tuned for more info on the new Gibson signature Orianthi acoustic as it becomes available.