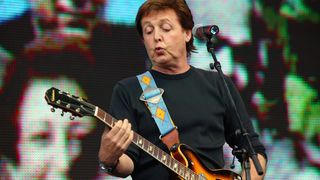 Paul McCartney’s 1997 album, Flaming Pie, has just received the deluxe reissue treatment, and among the gems included with the new edition is an hour-long studio tour, in which Macca shows you round his home studio – and some very important gear.

Most notable among his collection is his very first guitar amp, the Elpico A55.

“Instead of putting guitars into it, it says Mic1, Mic2, Gramophone – anything but guitars, really.”

As a result, the amp produces a fuzzy tonality when used with electric guitars, which is best heard on The Kinks’ You Really Got Me – although Dave Davies cut his amp’s speaker with a razor blade for extra distortion.

During a recent interview, McCartney revealed how Jimi Hendrix inspired him to buy his favorite electric guitar.

The Super Deluxe edition of Flaming Pie is out now in a number of physical formats.