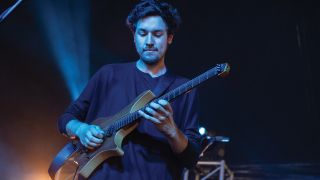 Australian prog-rock ace (and Guitar World columnist) Plini has demonstrated in the past how to build a complex riff from a simple melody.

Now the electric guitar player has taken things a step further, building a stunning instrumental piece out of, well, a photograph.

The guitarist recently took to Instagram to post a pic of birds in flight, over which he superimposed a music staff. He then interpreted the birds as notes, added a characteristically ethereal backing track and, well, the results are rather stunning, as you can see and hear.

Plini fans will also, um, note that this is not the first time the guitarist has attempted something of this nature. A few months back, he shared a photo of surfers in an ocean, which first inspired his “melody generation” idea.

At that time, Plini wrote:

“I posted this photo the other day and someone commented that the surfers looked like notation. So I put a stave over them, approximated the notes, sight-read an interpretation of the rhythm and added some other shit on top.”

As for the new "birds” melody, Plini says there’s more to come.

“I think I shall put it up on Bandcamp or something soon,” he writes, adding, “Please don’t judge my total inability to write sheet music.”