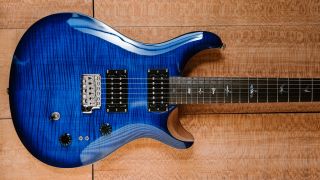 While PRS’s 35th Anniversary year hasn’t exactly been smooth sailing, the company has still announced an awful lot of new electric guitars. One of those new models was the 35th Anniversary SE Custom 24, launched back in October 2019.

The initial run of 3,500, finished in Black Gold Wrap Burst, were in hot demand, so PRS has seen fit to introduce a second finish: Faded Blue Burst, available in a run of 3,000.

What sets this limited-edition model apart is the way it combines the Custom 24’s looks and playability with the additional switching options of Paul’s Guitar.

The TCI ‘S’ treble and bass pickups can be adjusted via two mini-toggle switches, allowing players to put either or both pickups in humbucking or single-coil modes.

The 35th Anniversary SE Custom 24 is available now for $999. For more info, head to PRS Guitars.