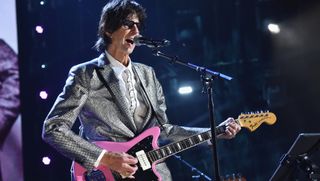 (Image credit: Kevin Mazur/Getty Images For The Rock and Roll Hall of Fame)

Ric Ocasek, frontman and co-founder of The Cars, has died at the age of 75, NBC New York 4 reports.

Yesterday afternoon, police received a call regarding an unconscious male at a townhouse on East 19th Street in Manhattan. He was pronounced dead at the scene. Law enforcement later confirmed that the man was Ocasek.

The Cars - who Ocasek co-founded with Benjamin Orr in 1976 - first came to prominence with their self-titled, 1978 debut album. Featuring massive hits My Best Friend’s Girl, Just What I Needed and Good Times Roll, the album went 6x Platinum, and made the band a mainstay on rock radio and the charts.

Though subsequent albums like 1979's Candy-O and 1984's Heartbeat City never quite matched up to the success of the band's debut, they did achieve multi-platinum sales, while producing hits like Let's Go and Drive.

The Cars broke up in 1987, but would go onto reunite in 2010 for a successful album - 2011's Move Like This - and North American tour. After disbanding once again, they would reunite one final time during their 2018 induction to the Rock and Roll Hall of Fame.

Ocasek also had a fruitful solo career, releasing seven albums under his own name, including 1997's Troubilizing, which was co-produced with Billy Corgan.

Weezer - whose massively popular self-titled debut album was produced by Ocasek - were among the many artists who paid tribute to Ocasek on social media following the news, writing on Instagram "[Ocasek] taught all of us so much about music, recording and songcraft. But more importantly he taught us that one can be in a respected position of great power and yet be absolutely humble and have the biggest sweetest heart in the industry."