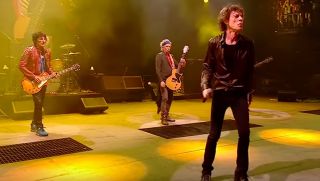 After postponing their 2019 No Filter North American stadium tour following the announcement that frontman Mick Jagger would undergo heart surgery, the Rolling Stones have unveiled rescheduled dates for the jaunt.

The new dates kick off on June 21 at Chicago’s Soldier Field and wrap August 31 at Miami’s Hard Rock Stadium.

“Tickets sold for the original dates will be honored—fans do not need to exchange their tickets,” the band said in a statement. “Those who cannot attend the re-scheduled date can refund their tickets by accessing their Ticketmaster account. For transferred tickets, the refund will go to the fan who originally bought the tickets, once they have been transferred back.”

In true Jagger fashion, the singer let fans know earlier this week he was feeling better with a video post on Instagram that showed him practicing his dance moves.

For more information or to purchase tickets, head here.