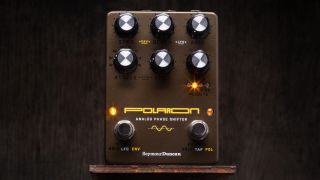 Seymour Duncan has introduced the Polaron, an analog phaser pedal with a separate digital processor for controlling LFO and envelope follower functions.

In LFO mode, the Polaron operates like a traditional phaser with tap tempo (via the right footswitch), while ENV mode allows the user to control the filter’s frequency via the pick attack. The two modes are selectable via the left footswitch.

The Polaron boasts an adjustable two- to 16-stage analog filter array, accessible via the Stages selector.

There are also Depth and Rate knobs, as well as Tune and Resonance controls for further tailoring of the phase shifter effects. A Sens knob adjusts envelope sensitivity when the pedal is in ENV mode.

The Polaron is available now for $229. For more information, head to Seymour Duncan.