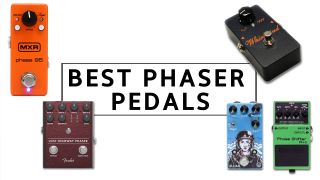 A phaser pedal - part of the modulation family - is one of the more distinctive effects you can employ in your guitar rig. It's used to add body to individual notes or to create that classic swirling, movement sound. You’ll have heard a phaser on everything from Isley Brothers’ Who’s That Lady to Van Halen’s Eruption - but whatever your preference, it’s important to know the best phaser pedal for your needs.

When making your decision on the right phaser to buy, you need to know whether you want analog or digital. Will you benefit from a variety of controls, or is speed control sufficient? And what is phasing, anyway? If you’re asking yourself these questions, read on for our round-up of the best phaser pedals on the market right now.

The best phaser pedal you can buy today

Our recommended phaser right now is the MXR Phase 95 - an updated take on the original, iconic Phase 90, beloved of Eddie Van Halen. Its simple setup of a single speed knob is bolstered by a two-stage Phase 45 setting, plus a choice of vintage or more modern sounds. All things considered, it offers a wide variety of sonics - you can’t go wrong with this pedal for delivering the phasing you need.

A phaser pedal, or phase shifter, is one of the earliest guitar effects and was originally developed to recreate the sound of rotating organ speakers. Phasers were adapted to create an array of sounds in ‘60s psychedelia for that swirling effect, and were notably used later by Van Halen. They remain a commonly used effect today.

Essentially, a phaser takes an input signal sine wave, duplicates it and moves it out of phase. The phaser then recombines the sine waves, and the difference between their peaks and troughs creates that noted phased sound.

Despite the reduced variety, many guitarists prefer the warm, original sound of analog compared to digital alternatives. Whether you have an analog or digital phaser, the most basic control is phase speed, which controls the speed of the rise and fall of the wave. The depth control relates to the intensity of the phased waves, while resonance, also called resolution, is another common EQ control, emphasizing various tones across the sweep.

Classic, swirling phase has often been emphasised on slow, ringing chord work. As you might expect, the speed of the phased waves should coordinate with the beat, which is why a phaser used to play chords is more usually employed at a steadier speed to avoid a melodic clash.

It’s preferable to match your phaser’s speed with the tempo of the song, which can be achieved through tap tempo or MIDI. This enables coordination of the exact speed. A phaser isn’t just for chords, though, and the staccato effect from Jimi Hendrix’s Machine Gun is a classic example. Phasing is also used to boost a signal for individual lead notes, without adding distortion.

The best phaser pedals you can buy today

The MXR Phase 90 is the classic analog phaser, operating over four stages, with a sound ranging from smooth to full-on bubbles - the Phase 95 not only shrinks it into a mini-pedal format, but adds extra features to boot.

While the original Phase 90 offered just a speed control, the Phase 95 adds a Phase 45 circuit for subtle two-stage sweeps, while a script switch toggles between feedback styles, enabling vintage and modern tones.

Countless guitarists regard the Eddie Van Halen-used Phase 90 as the classic phaser, but the Phase 95 makes it even better, in a size that will fit on any pedalboard.

One of the original phasers, with Radiohead-approved swirls

No list of best phaser pedals would be complete without the inclusion of this classic Electro-Harmonix design, now available in a Nano chassis.

The Small Stone is the phaser beloved of Radiohead (it's all over OK Computer), with a spacey swirl that lends a more ethereal edge over the all-out rock swoosh of the Phase 90.

That said, EHX's offering can get more extreme than many of its rivals, courtesy of a Color switch, which adds a more pronounced frequency shift.

The standout feature of the Walrus Audio Lillian Analog Phaser Pedal is the D-P-V, or dry, phase, vibrato control. This blend function gives great sensitivity between no phase, 50/50, through to full application, which covers a wide array of phasing effects. D-P-V is joined by a selection of a four or six-stage phaser, the latter of which adds boost to the sound. You can even hold down the foot selector for momentary phasing.

The rate setting is among the slowest we’ve seen, with subtlety which really stands out for playing less complex pieces. That said, pushed forward, especially with the feedback and blend control setting high, the Walrus Audio gives as much phasing effect as you’d ever need.

Like the MXR, the Whirlwind Rochester Orange Box Phaser Pedal has simplicity at its core with just a single control – speed. It does, though, represent the original '70s swirling sound, and it’s for this reason that the pedal retains its kudos.

It may have less impact in phase sound than the MXR Phase 90, though it retains more of the guitar and amp’s natural sound. Handwired in the USA, this stompbox has a high build quality and is going to take all the abuse you can throw at it.

The Boss PH-3 Phase Shifter Pedal has been around for many years, and for good reason. The digital phaser features speed, depth and resonance controls, plus a mode which switches between four, eight, 10 and 12 phase stages.

Unidirectional phasing, which creates a continual rise or fall, is achieved via two extra modes, plus a step effect. The addition of tap tempo mode keeps you in time, which you can control with greater flexibility by linking in an additional expression pedal.

The result is a wide array of digital phasing sounds, including classic analog simulation, built with Boss’s ever-durable construction.

Adds flanger and chorus effects to a classic phased sound

Source Audio’s Neuro Editor software is also provided, meaning access to a library of phaser, flanger and chorus effects, which can be downloaded to the pedal. Once you’ve created and selected your effects, save up to three at any one time.

The phased sound range is versatile, with the resonance setting adding a more metallic and wide sound range on the sweep. Four-stage phasing gives the classic sound, eight-stage adds the bubble effect and Uni-Vibe creates a real warble.

A range of sounds – but not quite authentic

Between four and eight-stage analog phasing, the Fender Lost Highway phaser pedal also features a fast/slow footswitch, with each hosting their own independent rate and depth controls. For vintage effect, Fender also simulates the speed ramp between the fast/slow settings.

The resulting sound is classic enough, though it gives more of a pulse than a whirl. Fender has also added a boost button to avoid any mid-range dip. The variety of the toggle switches does enable a broad phasing range, even if it slightly misses the classic sound.

The hardware is certainly durable as per the rest of Fender’s growing range of effects pedals.