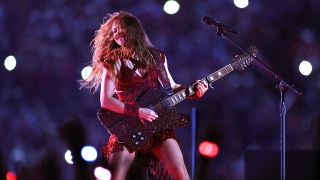 Shakira gave an electrifying performance at this year's Super Bowl halftime show, delivering hits including She Wolf, Empire, Hips Don't Lie and a finale of Waka Waka (This Time for Africa) alongside co-headliner Jennifer Lopez. The set even included a short section of Led Zeppelin's Kashmir.

But perhaps the biggest star of the show for us guitarists, was the Swarovski crystal-encrusted Gibson Firebird electric guitar that the multi-Grammy award-winning Colombian star played during the set. Featuring 70,000 hematite crystals, the guitar successfully reflected the dazzling and vibrant celebration of Latin music and showmanship.

It also got us thinking. This wasn't the first time Shakira played such an eye-catching guitar on stage. Here are some of the most incredible guitars the star has performed with over the years...

Shakira played this stunning pink Fender Mustang on the Oral Fixation tour in 2006/07. In a similar fashion to the Gibson Firebird she played at the Super Bowl, the guitar is covered all over in crystals, including the white pickguard.

This guitar was used during Shakira's El Dorado tour in 2018. In keeping with the tour's gold theme, the star wanted a guitar that looked as if it had been dipped in gold.

Shakira's guitar tech Drew Foppe had attempted to wrap a stock Revstar in a gold wrap before the project came about, but wasn't 100% satisfied with the result. Consequently, Foppe reached out to Yamaha designer and luthier Pat Campolattanoto to help him realize the singer's vision.

"The most difficult part is that the finishing process to turn everything gold involves a really fast chemical reaction that has to happen perfectly. It goes from grey to bright gold in about 15-30 seconds, and if you miss a spot, or do it improperly, you have to start all over again!" said Campolattanoto.

"The next level of difficulty is that the guitar is a set neck, so we had to do the whole body and neck in one shot."

Prior to the commencement of the El Dorado Tour, Shakira had taken time off to be with her two young children and partner, Barcelona soccer player Gerard Piqué, whom she had met on the set of the Waka Waka (This Time for Africa) music video.

Knowing that the upcoming tour and Piqué's career would see the family apart for long periods at a time, the Colombian star and her musical director Tim Mitchell met with Gibson to create a memento for her to perform with every night on stage.

Shakira commissioned Miami-based artist Dominic Pangborn to paint a photo of Gerard and her two children on the back of an acoustic guitar, which she would later hold up to the crowd every night after playing El Dorado's fifth track, Amarillo.