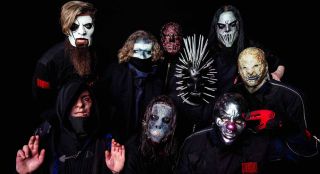 Slipknot have announced their highly anticipated sixth album, We Are Not Your Kind.

The band's first LP since 2014's .5: The Gray Chapter, it's set for an August 9 release via Roadrunner Records. You can check out the album's first single, "Unsainted," and its album art and tracklist, below.

“This is most time we’ve had to write a record, and work stuff out together," guitarist Jim Root said in a statement. "One of my inspirations this time around was those artists that recorded full length albums—not just songs. While the industry is moving toward singles, Slipknot wanted to make an album experience, front to back.”

The announcement of We Are Not Your Kind follows news of the band's massive Knotfest Roadshow North American tour. You can check out the full itinerary for the trek—which will also feature Volbeat, Gojira and Behemoth—right here.

To preorder We Are Not Your Kind, step right this way.

For more on Slipknot, head on over to slipknot1.com.

Slipknot—We Are Not Your Kind

3. Birth Of The Cruel

4. Death Because Of Death

13. Not Long For This World