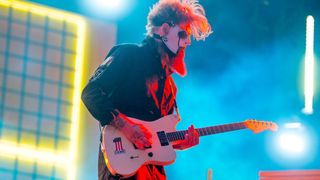 Slipknot’s sixth album, We Are Not Your Kind, is chock-full of huge guitar moments - in particular, we can’t get enough of that harmonized riff in Unsainted - but it seems some fans are never happy, apparently citing a lack of guitar solos - and now guitarist Jim Root has sought to address the criticism.

“I see a lot of comments like, ‘Where are the guitar solos on this record?’” Jim mused in a new interview with The Art & Span Show.

“Well, obviously, Mick [Thomson, guitar] and I are very into guitar; we love playing guitar, love doing solos over every song, but that didn’t occur to me. I was more concerned about the arrangements and making a good song top to bottom.

“There is a solo on Spiders, albeit a kind of a non-traditional solo, but that’s what I love. The point I’m trying to make is I get to think outside of the box and approach guitar playing in a way that I would never approach it with a song like Spiders, because Clown wrote that song and it didn’t come from my mind, so it’s hard for me to process it.”

Root expanded on the solo in Spiders during a wide-ranging interview with GW ahead of the album’s release.

“It’s like some weird, mid-'80s Bowie thing, and I got to do a cool Adrian Belew kind of outside-the-box guitar solo on it. I love doing stuff like that, that we haven’t done before.”

And for anyone bemoaning the album’s change in direction, there’s plenty more variety to come, so hold on tight.

“There’s a lot for us to achieve and a lot more music to explore,” Root says. “I’m not saying we want to start doing experimental prog or something, where it turns into elevator music after a few records, but I don’t think we’ve even scratched the surface.”