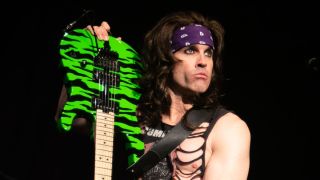 No matter who you ask, it seems everyone has an opinion on the electric guitar’s foremost neoclassical shredmeister, Yngwie Malmsteen - including Steel Panther’s chief riff merchant Satchel.

In a new interview with MusicRadar, discussing the 10 guitarists who blew his mind, the leopard-print enthusiast said, “He remains one of the most emotional guitar players of all time.

“He had so much feel that people often dismissed because he was so fast. His note choices were amazing, too… in my eyes, that made up for the fact his songwriting wasn’t quite up there with Van Halen or AC/DC.

“I loved Yngwie when he first came out, but as time went on I realized I only listened to him when I wanted to be inspired by awesome lead playing. If I’m in my car just driving around, I’ll probably to listen to something else.”

His comments echo those of Opeth main man Mikael Åkerfeldt, who recently said, “His records have been pretty fuckin’ shit for a long time, but the guitar playing has always been great.

As for Yngwie? He’s probably not bothered.

“I don’t try to please nine million people,” he told GW. “That’s not what I do. If some people don’t like it, that’s too bad.

“I’m not somebody that just came out of nowhere. I have an already-established guitar style, you know? And I never try to be something I’m not. So I apologize if I offended somebody!”