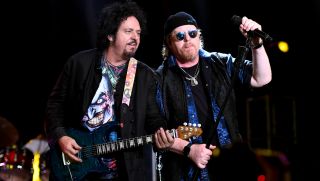 Toto guitarist Steve Lukather has confirmed that the long-running band, best known for smash hits like Hold the Line, Rosanna and… what is it… oh yes – Africa, will call it quits following their current 40 Trips Around the Sun 40th anniversary tour.

In an interview with The Morning Call, the electric guitar man said that the final date of the trek, on October 20 in Philadelphia, will be their last – at least in their current form.

"I don't know what the future-future's gonna be, but I do know that's gonna be the last show for the foreseeable future," he said. "And certainly the end of this configuration of Toto.”

Lukather was hesitant to say if Toto might re-emerge in a different form, but did add, “I can tell you that this version is dead October 20. We gotta take a break from all this. We were beat up really badly and we gotta heal and figure out what's going on.”

He continued, “I'm not saying I'm never gonna play this music again – that would be stupid to say; that would be a lie. I can play whatever I want from my entire career with whomever I want to, and so can everybody else. But I don't know what that is yet."

Lukather goes on to state that the decision to stop is based in part on the toll of being out on the road for long stretches of time.

“This kind of lifestyle is way harder than people think it is,” he admits. “They just think that we float around from city to city magically and live a life of luxury. And I’m not saying that we travel poorly, but it’s a burden to be away from your family 230 days a year, like me.”

As for what comes next for Luke personally, the Ernie Ball player revealed that he has a new solo record in the works, as well as a follow-up to his 2017 autobiography, The Gospel According to Luke. He’ll also still be out on the road as a member of Ringo Starr’s All-Starr Band.

“How do you say no to Ringo Starr? You just don’t,” he says. "But that is my vacation tour. I’m also touring on my own in Japan. I got a lot of stuff going on, man, all year long. I got a couple of my fusion bands working. There’s talk about something in Europe that I can’t talk about yet; but it’s like a guitar-player thing. It’s really cool.”