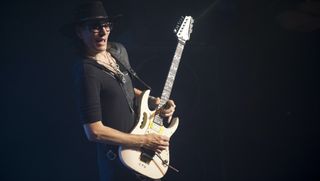 When Kurt Cobain and Nirvana first unleashed Nevermind on the world, Steve Vai was coming off a stint in Whitesnake and recording insane electric guitar instrumentals like this.

So you could be forgiven for assuming a guy like Vai might not appreciate the playing of someone like Cobain. But you’d also, apparently, be wrong.

In a recent interview with Ultimate Guitar, Vai was asked if he felt there was something that set players like the Nirvana leader apart from others.

"Yes,” Vai replied. “Their intention. When the intention is strong, nothing will stop them. Kurt Cobain is a good example of that. He just did the music he wanted to do – that's what my take is on it.

"When I hear him and I hear that band, I don't know how much music theory or anything like that he knew, but he was able to develop enough technique to get his point across. He didn't have a virtuoso technique, but he didn't need it.

"You've got to keep in mind that his style of playing – those chords and the way he would arpeggiate chords and then go into that blasting kind of thing. All the years I spent practicing scales and virtuoso type riffs, he was locking onto these chords in a very connected way.”

Vai also took the time to highlight another guitarist he feels falls into this category of player – Green Day’s Billie Joe Armstrong.

"When you see that guy strumming chords, it's virtuosic in a sense because it sounds like an orchestra when he slams that guitar – every string has its own zip code, you know what I mean? Kurt was like that too,” Vai said.

"A lot of people might not look at him as a virtuoso but he had a connection with the thing he was doing. He found his comfort zone with his technique. Everyone is doing that.

"Everybody needs some kind of technique and they will naturally gravitate to the thing that is most appropriate for them – if they don't get too confused with what everyone in the outside world is telling them. They've got to trust their instincts."

Appropriately enough, we just posted a guide on how to play guitar like Billie Joe - and nailing his idiosyncrasies is much harder than you might expect.

And if you thought you'd never catch Steve Vai playing Nirvana, either, we've got news for you: he teamed up with Joe Satriani and Guthrie Govan to offer up a very G3 take on Smells Like Teen Spirit back in 2016.